Should we narrate on-screen text? 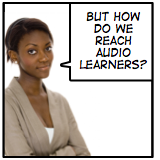 Research doesn’t support the popular idea that we should cater to different learning styles. However, research does show that reading printed text to learners hurts their performance.

Your safest bet is to let learners read on their own but use audio to describe complex graphics. It’s also good practice to present the same ideas in different ways–just not simultaneously.

The toolkit has recently been expanded:

Sign up yourself or a team, with team discounts. Learn more.

Skip back to main navigation
Tagged as: media choice research

21 comments on “Should we narrate on-screen text?”