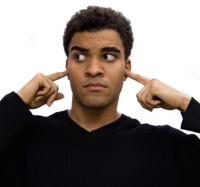 Do we really need narration?

When should elearning be narrated? I think we should rephrase the question as, “When is it a good idea to force all learners to go at the same pace?”

That’s what narrated material does. The pace of the narration controls the pace of the material. When you’re learning from narrated material, you can’t easily skim stuff you already know, or slow down and concentrate on the challenging parts, because the voice continues relentlessly at a pace that someone else established.

According to recommendations in books like Elearning and the Science of Instruction, we shouldn’t narrate text that’s displayed on the screen. The redundancy interferes with learners’ ability to digest what they’re being fed. So is it okay to remove the text and use narration alone?

Apparently it is if you’re presenting very short science lessons that are based on graphics, which is what was done in the studies that are often cited. Most of the lessons were no more than 5 minutes long, and the learners couldn’t control the pacing. Those studies suggested that in those situations it’s better to use narration rather than text to explain a graphic.

But what happens if you use narration in material that takes a lot longer to learn, such as an hour? In one study, students who read silent text at their own pace finished more quickly and scored better on both retention and transfer tests than did students who used a narrated version of the materials.

“Our findings imply that the guideline to use spoken text can be restricted to situations in which time pressures are high and instructions are system-paced, based on the pace of the narration, and to situations in which there is a potential high cognitive load so that it is not easy to compensate by investing more mental effort. In all other cases, visual text seems the more sensible presentation mode, especially because it is cheaper to produce, easier to deliver, and in combination with learner-paced instructions even more effective in terms of transfer of learning.” (emphasis mine)

Another study supported this finding: Learner-paced, text-based materials got better results than versions that used narration or controlled the pacing. (Also check out this study if you need citations that show that learners learn best when given control of the pacing.)

Where are the complex graphics in our elearning?

Most of the corporate elearning I’ve seen has only incidental graphics—the ubiquitous smiling stock people, images of buildings, or scenes from a scenario. We rarely need to explain a complex graphic. So it seems even more likely that we can confidently display silent text on the screen and trust our learners to read at the pace that’s best for them.

And if you’re concerned about the accessibility of text in Flash, check out this blog, which covers Flash accessibility in detail.

What if our main goal is motivation?

The studies on audio focused on transfer of knowledge. As far as I know, they didn’t look at attitude change. If the main goal of your materials is to inspire learners or otherwise appeal to their emotions, a human voice could make a big difference—but not if it’s reading a dry script.

There’s a lot more on this topic at the Learning Circuits blog and in a previous post on my blog: Should We Narrate On-Screen Text?

The toolkit has recently been expanded:

Sign up yourself or a team, with team discounts. Learn more.

61 comments on “Do we really need narration?”