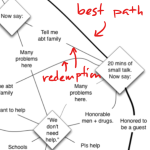 3 ways to help people learn from mistakes in branching scenarios

I’m in your branching scenario, and I’ve made a bad choice. Can I go back and change my decision, or do I have to continue, looking for ways to recover from my mistake? It depends! Learn more.

Let’s say I’m in your branching scenario, and I’ve made a not-great choice. You show me the not-great consequence of that choice. Now what?

Can I go back and change my decision, or do I have to continue in the story, looking for ways to recover from my mistake?

It depends on what you want me to practice. Here are some ideas to consider.

First, identify why I make mistakes on the job

Your analysis of “What makes this thing hard to do?” has probably shown you many reasons why people make mistakes during the task.

First, fix what you can, such as by improving processes, tools, or job aids.

Then, if you decide that practice activities will help, create activities that tempt people to make the same mistakes they’re making on the job. In your safe, fictional world, they can finally see the consequences of their mistakes and practice recovering from them.

There are a bajillion ways to tempt people to make mistakes, which may someday become a separate blog post, but for now here are some ideas.

Then decide what you want me to do

The answer to “Should they be able to change their decision?” depends on what you want players to do.

1. Learn a brand new thing by doing it

If you want me to learn to sell widgets to newly-arrived Martians, first tell me that you aren’t tracking anything I do. Then throw me into a sales conversation with some optional help. As I muddle through, show me the consequence of each choice and include the chance to “explore other options.”

“Explore other options” can take me back one step or more, depending on how the conversation is structured, so I can quickly see how a different statement changes the conversation.

I’m learning by trying stuff out, so I should be encouraged to try stuff out. I shouldn’t be penalized for making a not-great choice.

Also, of course, you’re just showing me the consequence of my choice. You’re not interrupting with “Incorrect!” or other preachiness.

My not-exactly-realistic Chainsaw Training scenario is a learn-by-doing activity.

2. Practice recognizing and recovering from mistakes in a thing I already do but don’t do well

Recommended: Make me continue in the story, looking for ways to repair the damage

If I already sell widgets to Martians but don’t do it well, throw me into the sales conversation with optional tips, as above. However, when I see the consequence for a choice, I don’t have the chance to go back and “explore other options.” I’m stuck with that choice and its consequences.

If my choice was not great, I need to do two things, just like in the real world: 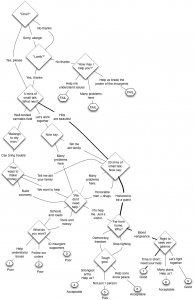 I continue the conversation, maybe finding a way to save it, and at the end of the scenario I see the final consequence. Only then do I get a chance to start over.

For this to work, the scenario has to have what participants in my scenario design course have called “redemption paths.” If I’m going down a not-good path and realize it, let me choose an option that will bring me to a better path.

Here’s an example from the Connect with Haji Kamal scenario. The heavier line shows the preferred path. At several points, I can realize I’m going in a poor direction and make a choice that brings me to the better path.

Below, I can realize that I haven’t continued the small talk enough. I can abandon my poor path and get onto the better one by asking about the haji’s family. 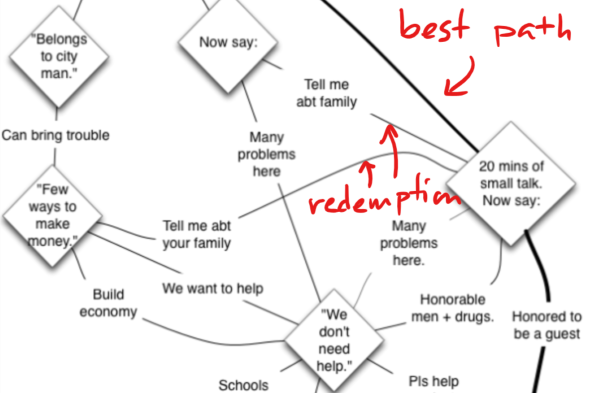 3. Practice doing a scary thing until I feel confident

Recommended: At first, let me explore other options. Later, challenge me to recover from my mistakes.

Let’s say that selling widgets to Martians is fraught with cross-cultural risks. If I say something the wrong way, my Martian prospect could get so offended that interplanetary relations could be damaged.

This is a scary situation, so you’ll want to give me lots of practice in a safe, fictional place. Once I prove that I can make good decisions, you can let me do it on the job with real Martians.

One way to do this is to give me multiple scenarios that increase in difficulty. In the earlier scenarios, let me “explore other options” so I can see the effects of different statements.

Later, maybe when I’ve said I’m ready for a more realistic challenge, give me scenarios in which I can’t go back. I have to recognize and recover from mistakes before they escalate into interplanetary offenses.

“But we need to assess them”

If a stakeholder insists on a formal assessment, you can use the same type of branching scenario. However, this time, tell me you’re tracking what I do, and give me no chance to turn back the clock. Crucially, give me redemption options that let me get onto more successful paths when I realize I’ve made a mistake, just like in the real world.

If you were providing optional help that I should have internalized by now, remove it. Make me fly solo.

A scenario can be used this way to evaluate learning as described in Will Thalheimer’s new evaluation model. See it here.

How can you do this with mini-scenarios?

A mini-scenario is a one-scene story in which I make a choice, I see the consequence, the end. It might seem like you don’t have enough room in the story to let people make and recover from mistakes, but there are some techniques you can use.

CHECK IT OUT
Skip back to main navigation
Tagged as: branching scenarios scenarios