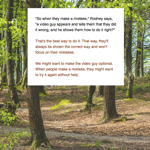 Your new client wants you to design training for chainsaw users. But what does he really need? And could I possibly be serious about this scenario? Learn more.

What's the best way to teach people to cut down a tree? Probably the best way isn't the approach recommended in this branching scenario. However, the scenario isn't supposed to be realistic. I wrote it to make a point.

Try the activity below. Do you agree with my point?

Photo by Stewart Black cc. Scenario was developed in Twine.

Spoiler alert! Play the scenario before you read on.

If you're familiar with action mapping, you probably saw what I was trying to do. The best ending to the scenario required you to do some (extremely quick) analysis of why it's hard to cut down a tree without squashing your house or car.

The analysis asks, "What decisions do people have to make? Why are those decisions tricky? How can we help people practice making the decisions in a safe place?"

Then your design focused on helping people practice the tricky things that would directly support the goal of reduced property damage. You didn't push information into their heads and then see if they could recognize it on a test.

I learned to cut down trees the way most people probably should: A more experienced person went into my woods with me. He helped me analyze each tree, set up the winch and rope, plan the cut, and adjust when things began to veer horribly out of control. But if that weren't possible, I'd look for training that let me practice the decisions in a safe place.

I've set up a scenario design headquarters on my site. In that section, you'll find more scenario examples, along with a research summary, a link to all scenario posts, and some tips on using Twine, the free editor I used to create the scenario in this post.

For more on letting people learn from their mistakes, you might check out these posts: