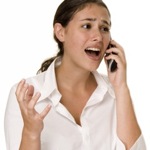 12 ways to use training scenarios – not just for elearning!

Decision-making scenarios aren’t just for elearning. Here are 12 ideas for other ways you can use branching scenarios to help people practice solving problems. Learn more. 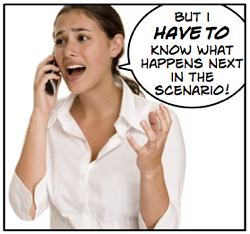 Decision-making scenarios aren't just for elearning. Here are 12 ideas for other ways you can use branching scenarios to help people practice solving problems.

First, some vocabulary. Each "decision point" in a branching scenario contains the following:

One of the great benefits of a challenging branching scenario is that it provokes discussion. No more glassy-eyed stares! Some ideas:

Keep your audience engaged by feeding them one scene a day. It's an email soap opera!

Are podcasts popular in your organization? Are you allowed to use YouTube? Go for it! You might also set up a discussion forum as described above or otherwise encourage people to talk about the scenario as it unfolds.

Make it controversial, and don't forget the debrief!

One of the strengths of scenarios is that they inspire discussion. Encourage that discussion by intentionally making your scenario not only challenging but also a little controversial, such as by failing to include a popular option or by making a common mistake so appealing that a lot of people fall for it.

Finally, I don't recommend using scenarios alone, no matter what setting you put them in. Learners need a debrief, some structured way to discuss, draw conclusions, build a model, and identify how they're going to change what they do.

4 comments on “12 ways to use training scenarios – not just for elearning!”