Branching scenarios: How many decision points?

You’ve decided a branching scenario will be part of your project. But how long should it be? See an example and some tips. Read more.

You’ve decided a branching scenario will be part of your project. But how long should it be?

First, I’m assuming that we’re talking about an exploratory or “learning” scenario, meaning a story in which learners make decisions without a lot of hand-holding and learn from the consequences of their decisions. I’m also assuming that the skill you want learners to develop is relatively complex, such as managing a conversation to create the best results.

Aim for 7 decision points in most paths

As a general rule I recommend that each path include at least 7 decision points, meaning even if I make a not-great decision, I continue down a path that includes more decisions, including ones that could lead me to a better path, and when I reach the end of the story, I’ve made about 7 (challenging! relevant!) decisions.

Of course, the optimal depth for an exploratory scenario will depend on a lot of factors, including the complexity of the skill you want learners to master, their attention span and tastes, and the amount of development time you have.

The magic of the number 7 is that you need to dig deep into the real-world challenges of the decision to be able to create that many realistic decisions. If you decide that, say, 3 is enough, you’re likely to stay on the too-easy surface or get stuck on just a small aspect of the decision.

What about bad decisions?

In some situations, you’ll want to have short paths that go quickly to failure if there are common but egregious mistakes being made by learners in the real world. 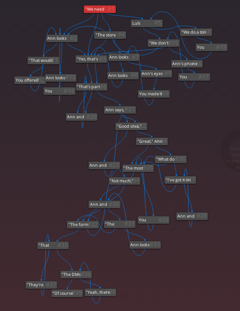 To see an example, try the AutoLoon Ethics Training scenario, which simulates the discussion between an instructional designer and a client who wants an information dump.

I included some short, 3-decision paths that go quickly to failure. I wanted to make clear that some common decisions made by instructional designers can quickly doom a project. Longer paths in the scenario include 10-12 decision points.

Let them go back

In an exploratory scenario, I think it’s best to let learners go back to the previous decision. This encourages them to explore, and it lets you include short, “bad” paths while still making the scenario interesting.

Have some learners review an early draft

The challenge for us as designers is that we’re so deep into the story and we’ve thought through so many possibilities that the scenarios we write can look more complex to us than they do to learners.

It could be a good idea to have a handful of typical learners complete an early draft of the scenario and talk about it with you, so you can get their perspective. It can be useful to do this in a small group, so learners talk with each other and possibly debate things, giving you a sense of how much the scenario is making them think.

CHECK IT OUT
Skip back to main navigation
Tagged as: branching scenarios examples

5 comments on “Branching scenarios: How many decision points?”