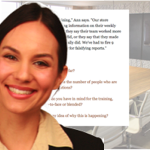 Give it some time to load; it’s old and a little stiff.

Here’s the same type of conversation, but developed with just one photo and lots more branching. Can you win the client and avoid an information dump?

I spent about the same amount of time writing and producing this as I did in creating the above scenario. But it’s a more realistic conversation and goes into more depth.

I saved time by using Twine, which makes it easy to manage branches and that combines writing and production.

Another big savings came from not searching for multiple images showing the client with subtly different expressions. For the type of discussion in the scenario, seeing every eyebrow twitch isn’t necessary, so photos aren’t necessary.

You might be thinking, “But everyone expects our stuff to look snazzy!” Maybe they’re used to bling, but they could discover that they prefer substance.

I’ve seen this work in the field, with cross-cultural training in the US Army. You might be familiar with the graphically rich Haji Kamal activity. That was one part of a large project. We also developed several other branching scenarios that were just text printed on paper, with directions like “Turn to page 9” next to an option. The paper scenarios were popular with the same demographic, at one point inspiring so much discussion that the bell rang to end class and they didn’t want to leave.