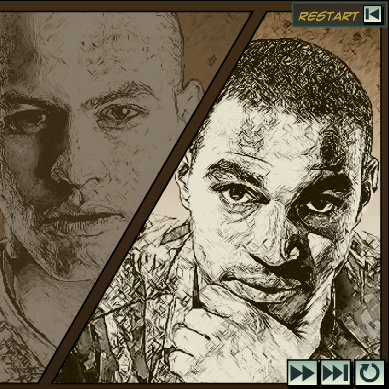 You’re a US Army sergeant in Afghanistan. Can you help a young lieutenant make a good impression on a Pashtun leader? Try the branching scenario and learn how it was designed. Read more

You’re a US Army sergeant in Afghanistan. Can you help a young lieutenant overcome cultural differences and make a good impression on a Pashtun leader?

That’s the challenge behind “Connect with Haji Kamal,” a branching scenario that my cool client Kinection and I developed for the US Army. The online scenario is the homework part of a lesson plan that includes in-class discussion about how to build rapport across cultures. It’s part of a much larger effort in the Army to strengthen soldiers’ cross-cultural and peacekeeping skills.

Turn on your speakers and play the scenario here.

If the site is down, the video below will give you a sense of how the activity works.

Goals for the scenario

The activity is designed to be completed as homework before a culture class, and it includes a facilitator guide with debrief questions. Our goals were to model specific rapport-building behaviors and inspire class discussion.

To follow the “good” paths, you need to see things from Haji Kamal’s point of view, show respect and patience, and otherwise apply cross-cultural skills that will be discussed in class. You end up on less successful branches by making more ethnocentric choices.

Our original content was a short description of a real-life discussion between a soldier and Pashtun leader. We added enough twists to end up with 12 paths through the material, using a flowchart to keep track of everything.

The paths cross at several points, as recommended in my scenario design course. This lets players practice recovering from mistakes and means that one bad choice doesn’t doom you to a bad ending.

The debate between two characters has its roots in classroom scenarios that we developed. During tests of those scenarios, we found that requiring participants to defend each option got them more deeply involved. The debate also simulates the kind of thinking that soldiers need to do in the field to challenge their cultural assumptions.

For this scenario, the debate also replicates real life — often a sergeant asks squad leaders for their ideas and then advises the lieutenant. To make the player think independently, we also included an undebated option.

To make sure the story and arguments were believable, we ran a classroom debate version of the scenario with a group from our target audience. We collected their arguments for each option and then wrote the script for the online version.

In focus groups about their training preferences, soldiers made clear that they prefer video. However, that wasn’t in our budget or timeline, so we went with the soldiers’ second best, graphic novel illustration. The images are comic-ified photos.

We used audio for the debating squad leaders because their arguments were core to the game. The lieutenant and Haji Kamal are limited to silent dialog bubbles mainly to avoid the challenge of providing audio for Haji Kamal, who in real life wouldn’t speak English. Our audience members are sticklers for authenticity, so the best solution would have been to have the Haji speak in Pashto and display his dialog bubble in English, but that would add a distracting layer of complexity.

We kept animation to a minimum for the same reason — we wanted players to focus on the ideas and story.

The game and its accompanying facilitator guide were tested by soldiers in a culture class at Fort Huachuca NCOA. It looks like the activity met our goal of inspiring discussion: 70% of the players said that they were looking forward to discussing the game in class the next day, and instructors reported that the activity “prompted the majority of the discussion” and encouraged soldiers to share their own experiences.

The activity will be part of a larger toolkit for military educators. The toolkit includes more decision-making scenarios in several formats, all of them designed to help soldiers practice specific cross-cultural capabilities.

This branching scenario took me about 20-40 hours to plot and write. That’s the time I need after the goals were identified, we knew what the players needed to do in the real world, we understood the mistakes they commonly make, and the SME provided at least the germ of a realistic story. It didn’t include project management time, audience testing, audio and graphics sourcing, Flash development, QA, etc., and luckily reviewers didn’t make major changes.

That’s a lot more time than it would take to throw together a slideshow on “Key Concepts in Rapport Building: Afghanistan,” but we like to think the resulting activity is more memorable and more likely to change behavior. Also, plotting and testing the scenario would have gone much more quickly if I had access to a tool like Twine.

In an ideal world, instructional designers could spend our limited time on immersive activities that have a big potential impact, and all those Flashified information dumps could instead be cheap PDFs or intranet pages.

The toolkit has recently been expanded: Sign up yourself or a team, with team discounts. Learn more.
Skip back to main navigation
Tagged as: activity ideas branching scenarios examples format choice media choice scenarios

42 comments on “Scenario based training example: Connect with Haji Kamal”