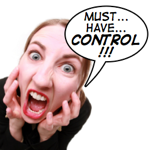 Is it ever okay to be a control freak?

Is it ever okay to lead people by the nose through a new experience, or does that make us control freaks? Let’s look at an example. Learn more.

Here’s a short scenario that uses a particular type of structure. What do you think about it?

Spoiler alert! Play the scenario above before you read on.

What type of branching is this? 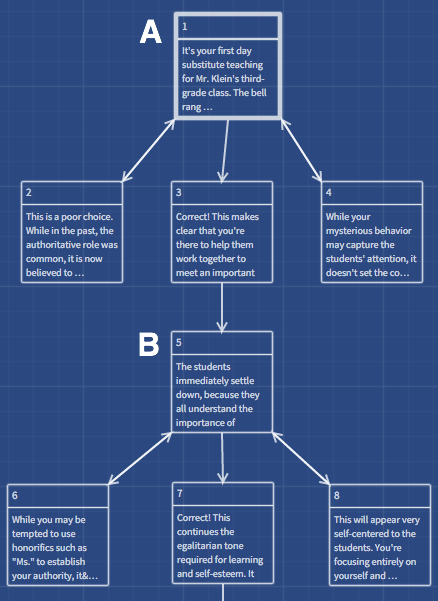 If you’re feeling cranky, you could call this the “control freak” approach to scenario design: No one may advance without first making the correct choice, and then all people must advance as one obedient mass to the same scene.

If you’re feeling more generous, you might call it a “teaching” scenario.

The extreme control exercised by the designer could actually be useful in the following conditions:

In other words, people new to the topic learn about it through a guided experience first, not through an information presentation followed by a “practice” activity.

What could happen if we put the information first?

Let’s run an imaginary experiment. Let’s not start with the scenario. Instead, we’ll give our learners lots of do’s and don’ts about classroom management. We’ll follow that with a video of an expert talking about how honorifics like “Ms” supposedly squash students’ self-esteem, and then, finally, we’ll send them into the scenario to “practice what they’ve learned.”

Now that our learners are no longer absolute beginners, the relentless feedback and forced re-tries are likely to feel annoying and even patronizing.

“But we have to give them information!”

I agree, we do — after the scenario.

We can give people a chance to learn through the (very!) structured experience first, and then help them synthesize what they learned by giving them some reinforcing information. We can trot out the video expert after the scenario, for example, to reinforce the scenario’s message about honorifics.

Putting the scenario first does several things. It:

For more on this activity-first approach, see my post “Throw them in the deep end!”

However, I still recommend true branching for most audiences

I focus on instructional design for adults in the working world. Most people in this world already have at least some previous experience or knowledge of the common topics covered in corporate training (how to treat people nicely, how to sell stuff, how to avoid breaking laws…).

As a result, I suspect that in most situations, a truly branching scenario would be more satisfying for the players. By letting people make mistakes, see the consequences of those mistakes, and draw conclusions, we’re saying, “I acknowledge that you’re an adult with a brain and life experience, and I trust you to be able to learn from more experience.”

Our careful handling of the branches, feedback at the ends of the paths, and optional help or resources along the way will help make sure that players are drawing the right conclusions without getting too frustrated. It’s all about choosing the appropriate amount of scaffolding for our audience.

For an example of a “real” branching scenario for people with some prior knowledge, try playing this scenario, which helps you practice managing a client who wants you to create a course when that might not be the best solution.

CHECK IT OUT
Skip back to main navigation
Tagged as: activity ideas branching scenarios motivation scenarios

13 comments on “Is it ever okay to be a control freak?”