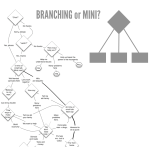 What type of scenario do you need? Will a one-scene mini-scenario be enough, or do you need a branching scenario? Learn more. 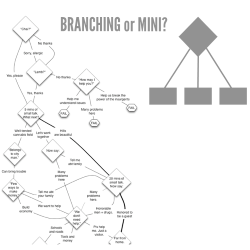 You want people to practice making decisions in a situation that has grey areas -- that's perfect territory for an elearning scenario. But what type of scenario do you need?

Will a one-scene mini-scenario be enough, or do you need to invest the (considerable!) time in creating a branching scenario?

Here are some ways to figure that out.

A mini-scenario is just one question. It gives you a realistic challenge, you make your choice, you see the realistic consequence, the end. The consequence might be a fast-forward peek into the future, but you make a decision in just one scene.

The following is a bare-bones mini-scenario. Ignore the fact that I obviously made up the options. Look at what the scene is requiring you to do and what type of feedback you get.

Bill needs to pass a scalpel to Sara during surgery. What should he do?

a) Put the scalpel in a sterile kidney dish and hold the dish out to Sara.
b) Hold it by the neck and place the handle in Sara's palm.
c) Put it on the surgical drape for her to pick up herself.
d) Toss it gently in her direction, handle first.

Feedback for b: Sara is distracted by a loose clamp and moves her hand just as Bill places the handle in her palm. The scalpel cuts Bill's thumb.

The feedback shows the consequences. It doesn't say, "Incorrect. You should never..."

Other people use "mini-scenario" to mean different things. For me, “mini-scenario” doesn’t mean an activity that forces people to go back and do it right, an easy activity, or something that happens only within a limited timeframe. The choice you make in a mini-scenario could have consequences that appear years later, but it's still a mini-scenario by my definition because it's just one decision.

Another way to look at it: You can make a mini-scenario using any multiple-choice question tool that lets you provide unique feedback for each option. It can be long or short, but it's just one decision, so it's a mini-scenario in my world.

When to use minis

Mini-scenarios are useful when...

The consequence of the player's choice could happen immediately or in the future.

In the example with Andreas, if you choose the right plan, the feedback could say that five months later, Andreas gets hit by a bus in Zambia but is treated at no cost thanks to you having sold him the correct plan.

If you choose the wrong one, poor Andreas has to limp to an ATM and withdraw large amounts of cash.

So even though the consequence happens in the future, this is a mini-scenario because just one decision was required.

Examples where mini-scenarios are appropriate

String them together for a pseudo-story

A series of mini-scenarios can be strung together to create what feels like a story, but the consequence of one decision doesn't determine how the next decision is made.

A typical example is a "day in the life" story of disconnected decisions. For example, we play the role of a security guard who has to recognize and resolve unrelated issues during the day. Our decision about the tripping hazard at 10 AM doesn't affect what we do about the unlocked door at 1 PM.

You can dig pretty deep in a mini

Players make just one decision, but that decision can be difficult. See the previous post on using mini-scenarios to practice recovering from mistakes to see an example.

A branching scenario contains multiple questions ("decision points"). The consequence of one decision affects the next decision.

Try these examples of branching scenarios if you aren't already familiar with the format.

When to use branching

Branching scenarios are useful when a decision made at one point determines the input for a decision made later. A classic example is a tricky conversation in which you ask the wrong question, limiting the information you have to work with in a later part of the discussion.

A common mistake is to assume you need a branching scenario if you want people to practice a longish process. However, you need branching only if:

If you decide that you don’t really need branching, you might consider offering several mini-scenarios that focus just on the tricky step in the process, as described in Mini-scenarios: How to help people recover from mistakes. 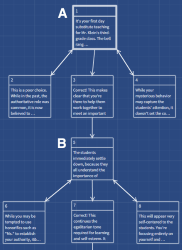 A third type of scenario might look at first like a branching scenario, but there’s just one path. Two people going through the activity will see the same questions because there’s only one way through the story.

To progress in the story, you have to answer “correctly.” If you choose a “wrong” answer, you’re forced to go back and try again until you get it right. Then the story continues.

I call this a “control-freak scenario,” because that’s how it feels to the player. You’re not allowed to experiment. You’re punished for bad choices by being made to go back and try again until you get it right.

Learn more about control-freak scenarios and when (rarely!) they might be useful.

There's a lot more in my book

My book Map it digs deep into how to design these types of activities.

CHECK IT OUT
Skip back to main navigation
Tagged as: branching scenarios mini scenarios scenarios