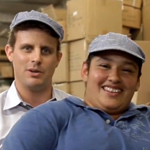 3 powerful ideas you should steal from marketing

A popular commercial for shaving products gives us three ideas we can use to make training memorable and motivating. Learn more.

Marketers and trainers have the same goals: They want people to do something. But they achieve those goals in vastly different ways, and I think marketers often do it better. Let’s look at some techniques we can steal from a successful marketing video.

Here’s our role model, the immensely popular commercial for the Dollar Shave Club. Not allowed to watch YouTube? Watch the same video here on Vimeo.

Put on your headphones — inappropriate language is bleeped out but could still offend.

The video was so effective that the influx of traffic knocked the Dollar Shave Club site offline. The commercial has been featured in several publications as an example of highly effective, low-budget marketing.

Now for the “training” version

What does the Dollar Shave Club guy want us to do? He wants us to go to his site and sign up for his service. Let’s look at how an instructional designer might try to inspire the same action.

Here’s the training version, without audio. Many elearning developers would have a narrator read the screen to you, but I couldn’t make myself do it.

What does the Dollar Shave Club guy do differently?

Here are just a few differences.

The Dollar Shave Club guy uses a fast pace, he mocks other commercials because he knows we see them as dumb, and he lets us draw conclusions rather than telling us everything explicitly. He says, “I think you’re smart,” and that makes us like him.

The training version plods and spoon-feeds us predigested information. It doesn’t let us draw any conclusions on our own. It says, “I think you’re dumb, so dumb that I have to lead you by the nose through the most basic of information.” Who wants to be told they’re dumb?

2. “I’m an actual human being with a personality.”

Who’s the person behind the training version? There’s no one there. It’s the tiresome Omniscient One, the faceless, personality-free voice of the nobody who knows everything. It’s no underdog, it’s Big Brother.

Also, in the video we meet Alejandra, a person who’s real and therefore memorable. In the training version, she’s replaced by a forgettable abstraction, an “order fulfillment position.”

The Dollar Shave Club commercial is one huge surprise filled with many smaller surprises. Big surprise: “This can’t be a real ad! Wait, it is!” Smaller surprises: Everything else.

You or your stakeholders might already be saying the following.

“We don’t have that kind of budget!”

It’s not the budget, it’s the ideas. I’m not saying, “Produce a funny video commercial.” I’m saying, “Treat your audience like they’re smart,” “Use a real person with a personality,” and “Don’t be so predictable.”

“But we’re not selling anything. The comparison is unfair.”

Marketers want to inspire a specific action. It can be “Buy the razor,” but it can also be “Sign up for our email list” or “Test drive our car.” Just like marketers, we want people to do something. We want them to encrypt emails, use the 5-step Difficult Conversations model, stop standing on chairs to reach high shelves… Marketing has tested a bajillion ways to get people to act, and we should steal the good ones.

“Obscenities are a low form of humor and we could never use them.”

I’m not suggesting you use any obscenities. I’m suggesting you look at the larger picture, such as the three ideas listed above that separate lively marketing from conventional training.

21 comments on “3 powerful ideas you should steal from marketing”