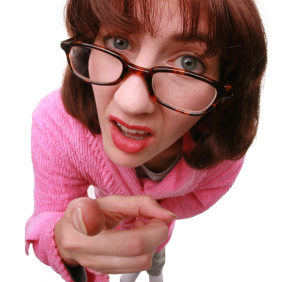 Scenarios: the good, the bad, and the preachy

Not a real on-the-job decision

Carla, a sales person, is meeting with Amit, a new customer. She shows him a megawidget.

“I don’t want a megawidget,” Amit says. “I came in here for a microwidget.”

What is this an example of?
a. Product Boundary Issues
b. Customer Misvetting
c. Courageous Upselling

What’s wrong with this scenario?

We’re not asking the learner to make a challenging decision like the ones they make on the job. We’re checking the learner’s short-term memory: Can they still recognize “Customer Misvetting,” which we defined three screens ago?

We’ve disguised a quiz question as a scenario. It’s better than a generic quiz question, but it doesn’t require the kind of thinking that learners need to do on the job.

A better question would ask what Carla should do, with the correct choice being the type of action that will correct a case of “Customer Misvetting.” Then we’d be testing the learner’s ability to recognize the problem and their ability to solve it.

How is the following scenario different?

Carla, a sales person, is meeting with Amit, a new customer.

“I might be interested in your J-12 microwidget,” Amit says. “At 79 wigabits, it has enough power for paramatizing. But I’ve read that it runs hot.”

What should Carla say?
a. “Are you referring to the Widget World review?”
b. “Actually, the J-12 has only 60 wigabits. I think you’d need the K-77.”
c. “Our studies have never shown any heat issues with the J-12. Would you like to see the test results?”

Why is this question better?

It more closely mirrors what salespeople actually have to do, which is listen and respond to customers’ needs and concerns. We’re not asking learners to regurgitate facts but to make choices in nuanced situations.

Let’s say the learner chooses option C above—they think Carla should tell Amit, “Our studies have never shown any heat issues with the J-12. Would you like to see the test results?”

What’s the difference between the following types of feedback for that choice?

While this response won’t derail the sales conversation, it could make Carla seem defensive and possibly increase Amit’s skepticism. It would be better for Carla to show that she’s familiar with what the industry is saying about our widgets. Try again.

“I’m not surprised that your studies don’t show any problems,” Amit says, sounding a little annoyed. “But Widget World does rigorous, independent testing, and they found heat issues. What can you say about their results?”

“Telling” feedback destroys the sense of being in a story and, worse, it relieves the learner of any need to think. “Showing” feedback emulates real life: something happens and the learner draws a conclusion from it, using a lot more brain. It’s also more concrete and therefore more likely to be remembered. 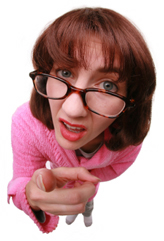 If you’re worried that your learners won’t be able to extrapolate from “showing” feedback, you might be tempted to provide additional “telling” feedback, like “Carla needs to show that she’s familiar with what the industry is saying about our widgets.” But fight this temptation, because:

I wrote the sample scenarios as text because that was easiest given my limited time. Obviously, interactions like these could be developed in any number of ways, from photos with dialog bubbles to video.

CHECK IT OUT
Skip back to main navigation
Tagged as: activity ideas mini scenarios scenarios

8 comments on “Scenarios: the good, the bad, and the preachy”